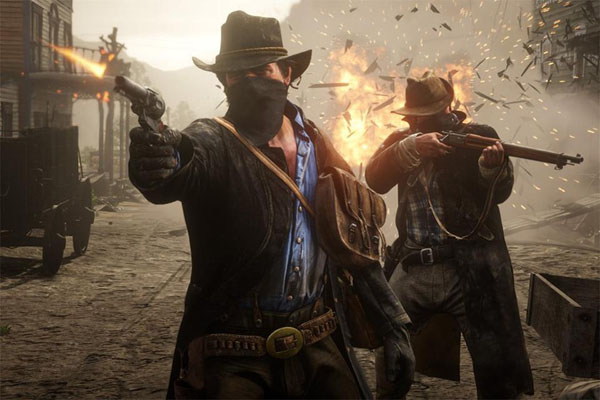 Red Dead Redemption 2 is a Western action-adventure game developed and published by Rockstar Games. The game's vast and atmospheric world also provides the foundation for a brand new online multiplayer experience. America, 1899. The end of the wild west era has begun as lawmen hunt down the last remaining outlaw gangs. Those who will not surrender are killed. From a first- and third-person perspective, players traverse an open-world, Wild-West environment; complete mission objectives; interact with characters, and engage in gunfights with lawmen and other outlaws. Players use bows, pistols, shotguns, rifles, and explosives to kill enemies in frenetic combat; shooting enemies occasionally triggers a close-up, slow-motion view of enemies getting shot and killed In my opinion one of the best games ever published. You take the role as the outlaw Arthur Morgan the trusted right-hand man to Dutch Van der Linde, himself the leader of the infamous Van der Linde gang. During the beginning of the game, you will have to do a robbery that goes wrong that forces  Arthur Morgan and the Van der Linde gang have to flee from the area from the nations top bounty hunters and the FBI. The gang must rob, steal and fight their way across the tough heartland of America to survive. The Van der Linde is a gang of outlaws, renegades, and misfits, bonded together under the charismatic and idealistic Dutch van der Linde. They have chosen to live outside the law and now fear it may be catching up with them.